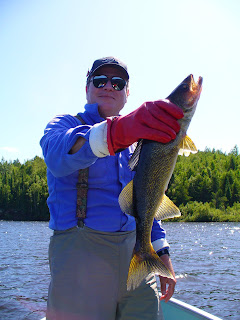 I’ve been fishing Eagle Lake walleyes for the past 25 years and the catching is much better now than it used to be. Although I can’t document it, I believe that I have caught more and bigger walleyes in the past five years than in the previous 20 combined–way more. There are several reasons for this. I have learned to fish where the fish are located (in the greater Vermilion Bay area). I’m using effective fish-catching systems (usually crawlers on spinner harnesses with bottom-bouncers). And I’m fishing deeper water. These factors are mostly about knowledge and skill, which in my case have gotten a lot better. But, the most significant variables that have boosted my success are time on the water and the improvement of Eagle as a walleye fishery.
I have been fortunate to have some very good fishing partners that have helped me pursue Eagle’s walleyes. Pictured here is my friend, Andy Lewis. He is a ver 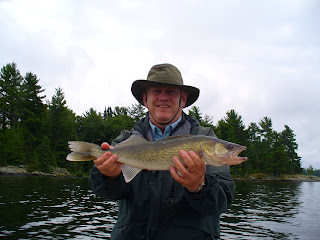 y good multi-species angler and the best walleye guy I know. He fishes hard and effectively, and we have learned a lot from each other. This year we caught hordes of walleyes within sight of VBL, as has been the case for several years now. We are getting fish of all sizes, too–from piddlers up to 26 inches this summer. We think this is a good “quality indicator” of the walleye fishery on Eagle. Hopefully, 2010 will be the year we crack the code for catching some of Eagle’s monster walleyes–fish in the 28-32 inch class. Fish of this size have eluded us thus far.
Incidentally, Gord and I wrote a short primer that offers a few methods for catching walleyes on Eagle Lake. You might find something of value in it if you’re new to the sport or want to consider doing something different. The document can be found on the VBL web site.
I’m going to finish-up this post with a few words about walleye conservation. In 2008 the Minnesota DNR published, Hooking Mortality of Walleye Caught from the Deep Waters of Rainy Lake. I obtained the report and spoke to its author. In essence, data were collected to evaluate the relationship between the rate of mortality and depth of capture, fish length, water temperature, and experimental handling time. The study was based on walleye caught by anglers and then held in deep holding cages, allowing the fish to reestablish themselves at the depth of capture. After five days the cages were lifted and survival was recorded. A total of 284walleye were captured and used in the analysis; 88 died as a result of hooking mortality (31%).
Capture depth had the largest effect on mortality, though handling time also had a significant effect. Increases in either variable were associated with higher mortality rates. The DNR model predicts that when angling in deep water the mortality rate varies from 8% in 30 feet of water to 35% in 50 feet of water.
The study was conducted over a two-year period, July-September. This is when I do most of my walleye fishing on Eagle and the vast majority of my fish are caught in deep water. I have observed a very small level of mortality with most fish appearing to be okay upon release. I watch them swim right back to the bottom on my sonar unit. But a few fish are nearly dead upon netting due to the change in atmospheric pressure. These fish are like balloons being inflated–air bubbles are leaking and their eyes bulge outward. They are dead in less than a minute and revival is impossible. I caught well over 100 walleyes last summer and had three fish die in this manner. Two were under 18 inches and became eaters, but one was in the slot and had to be released dead.

The discussion I had with the study’s author helped me think through my strategy for fishing walleyes in deep water. Here’s how I will go about it.

Fishing causes fish mortality, whether intentional or not. I hope you will consider what you can do to keep it to a minimum, no matter what species you fish.