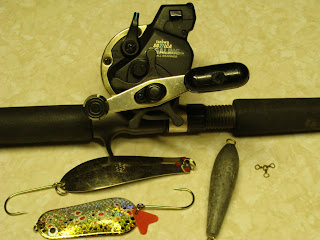 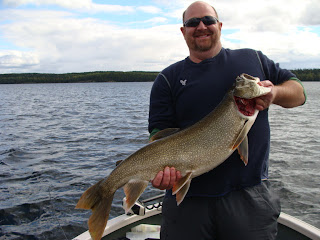 Marty and I just returned from VBL and, for the most part, we were humbled by the walleye and pike this trip. For the past four years the late summer walleye bite in the Vermilion Bay area has been outstanding with lots of fish caught, including many large fish. Not so this trip. Although we caught dozens, most walleyes were in the 14-16 inch range. Our biggest went 23″ and each of us caught one in the five inch class. I’d never seen a walleye that small before.
We worked the hell out of deep areas (25-55′) with bottom-bouncers and crawler spinners that held plenty of fish, but the bite was very tentative. Mostly, our baits were ignored. The pike were even less cooperative. Again, the fish were running on the small size. The sole exception was a fat 34″er that I got on Clearwater Lake. But overall, the pike bite was slow for us. We weren’t alone. Most VBL guests were running into the same situation that week.
My conclusion is that Marty and I were doing something wrong. Otherwise we would have caught more and bigger fish. This I need to contemplate.
Lake Trout fishing was good the day we spent on the West Arm of Eagle, running our lures in the deep water of Trout Holes #1 and #2. This is typically a “hit or miss” situation. And it’s not unusual to get skunked. But this area holds some big lakers and anything 35 inches or more is a big laker. Several fish in this class have come to net in the last few years. They fight incredibly hard and for a long time. For my money, these are the best fish to catch in Eagle.
Marty wanted one of these bruisers more so than anything else on this trip. His wishes materialized with the monster 38 ” laker shown above. This heavy fish was successfully released. Gord estimated it’s weight to be about twenty-five pounds and I think that’s pretty close. This was one of six we caught that day, which also included three piddlers (caught by me) and a pair of 26″ers caught by Marty. Four years ago, my buddy Andy also caught and released a 38″ laker from Trout Hole #2. According to Gord, these are the two largest lakers ever caught on Eagle by VBL guests. I hope to catch one someday as well, but netting both of these brutes was very thrilling, regardless.
The top picture reveals the basic set-up we use for lake trout. It shows my St. Croix Trolling Rod, Dawia Line Counter Reel, three-way swivel, eight oz. lead weight and typical spoons. The reel is spooled with 14# FireLine. The spoon and dropper weight are tied to the swivel with 14# fluorocarbon line. A system like this will catch big lakers, but sometimes we have 225′ of line out to get our lures down into 70′ of water.