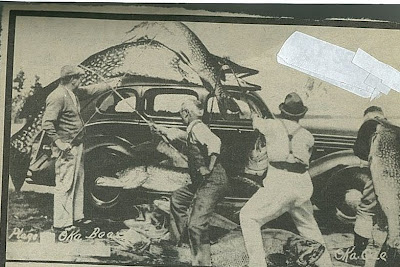 From the dusty VBL archives I have unearthed this photo of some happy guests getting loaded up for the return trip home. Obviously this was “back in the day” before sensible conservation measures. The only thing I can compare this lack of fishing ethics to is the times in Clearwater Lake when several boats from another lodge* took up the disturbing practise of trying to fill giant coolers they had mounted in the bows of their boats with whitefish & trout. We referred to these as “cooler boats”……..

Here is a fish tale from last week. The weather was great and the Walleye Highway was on fire! We had been catching them in 8-10 feet of water where the walleye seemed to be targeting mayfly larvae (judging by their stomach contents). Bruce Rasmussen and Bill Shultz were doing well……Bruce had already released a 28″ beauty when Bill tied into a good one. When they were able to get it to the side of the boat they realized that it was bigger than the one Bruce had landed….unfortunately that was about the time the big fish broke the line on Bruce and swam off with the orange Little Joe spinner. Fast forward a day or so to the same location, but this time the Missouri boys from cabin 6 are catching some walleye but notice what they think is a turtle on the surface. Motoring over they discover the “turtle” is a huge walleye that has a 20″ northern sideways in it’s mouth! After unsuccessfully trying to net the fish it swam off after abandoning its pike snack. When they mentioned this to me I was somewhat leery of this, I mean, how often do walleye attack pike? Then they mentioned that it had a orange Little Joe stuck in it’s jaw…………..!!