In an effort to infuse a bit of extra “fun” into the season a number of years ago we came up with a few competitions (of a friendly nature) to inspire our guests to rise to the top, swing for the fence, don’t pee into the wind, etc.  Who would have thought that in 2019 we would be coming into our 15th Musky Madness Week or our 14th Walleye Madness Week!  That’s a fairly distinguished alumni of trophy winners over the years…..including Jeremy Wade from River Monsters who took the Musky trophy several years back.  Add to the excitement the relatively young Bull Perch Rodeo contest with it’s nail biting season long climax…a veritable hunt for the “big one”.  You might be thinking right about now that it’s almost too much to comprehend.  Well let’s simplify it by talking about this year’s competitions, the winners, and the losers….  Let’s examine Walleye Madness Week.  The last week of July brings together a seasoned bunch of walleye anglers. 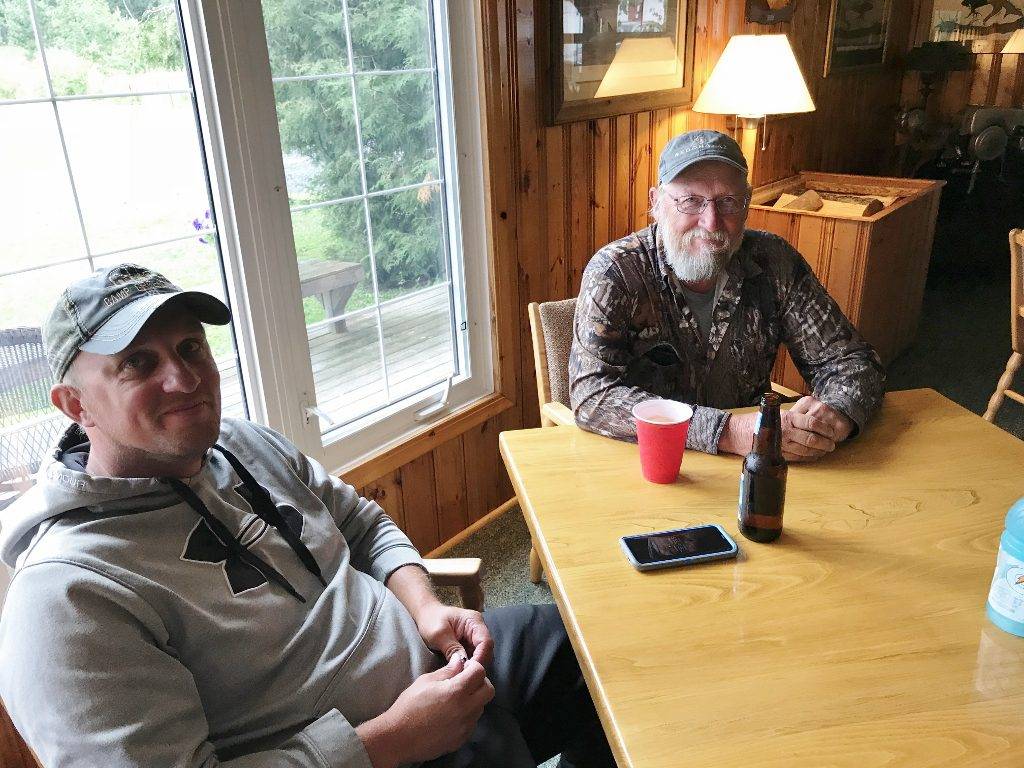 As you can see, the tension is palpable at the awards night ceremony and pot luck dinner.  Will they win?  They look confident.  A big walleye under their belt?  Maybe… 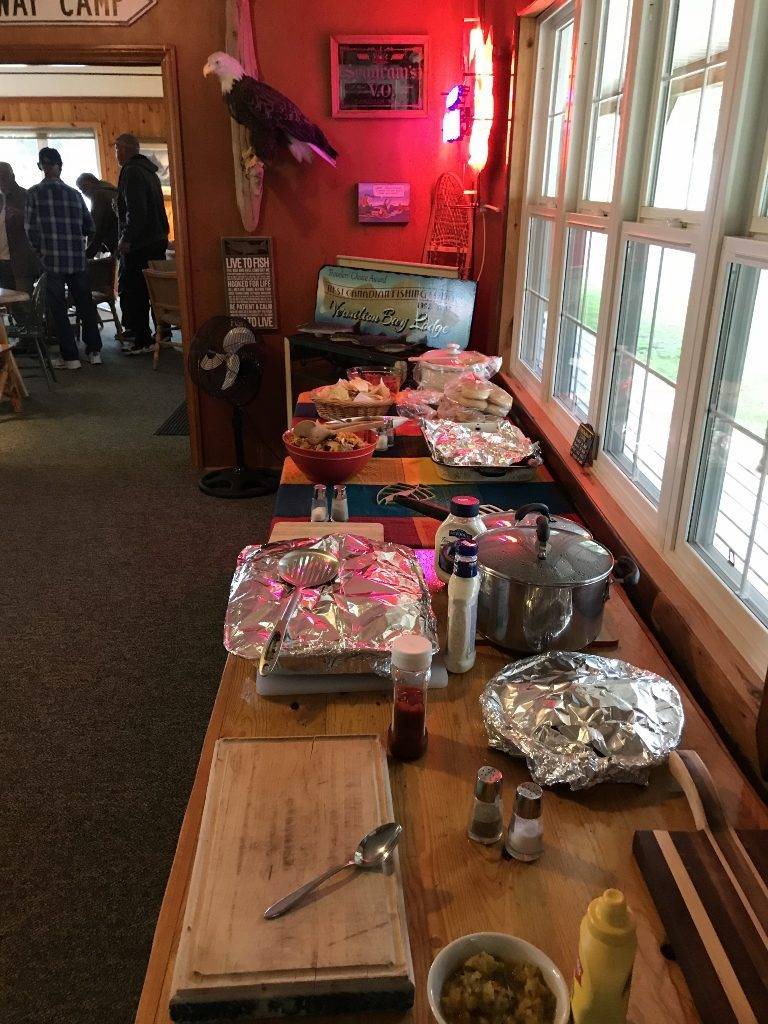 The table is being set.  The trophies polished.  The prizes sorted.  The beer is flowing.  The fish are safe for a few hours… 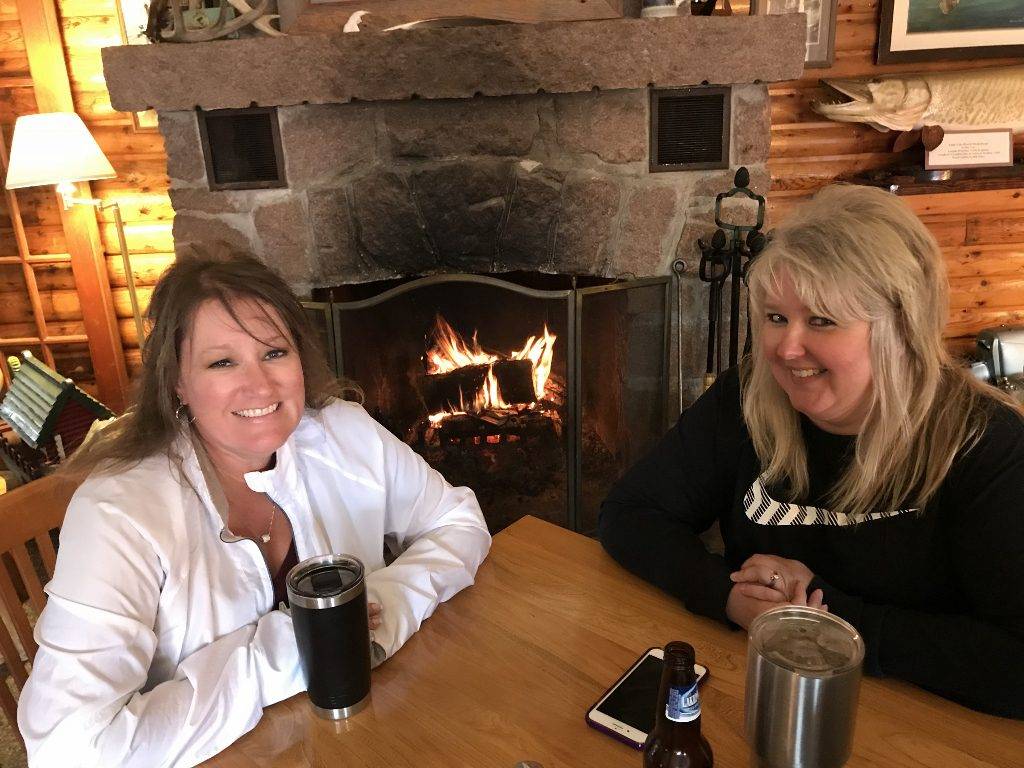 Meanwhile the ladies take in the fire and flagons of home brew.  Sorry, you can’t hide the cocktails…the eyes tell all.  Guilty! 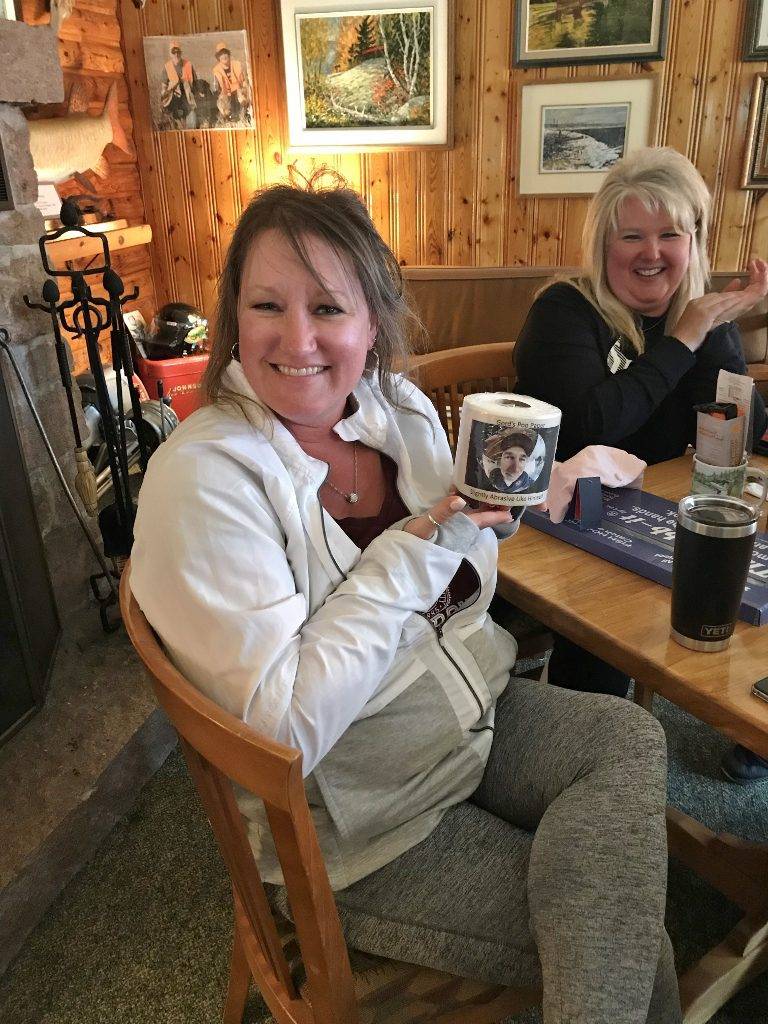 A strong effort is rewarded.  You can never get enough of Gord’s special Poo Paper…autographed, of course.  “Slightly abrasive like himself” 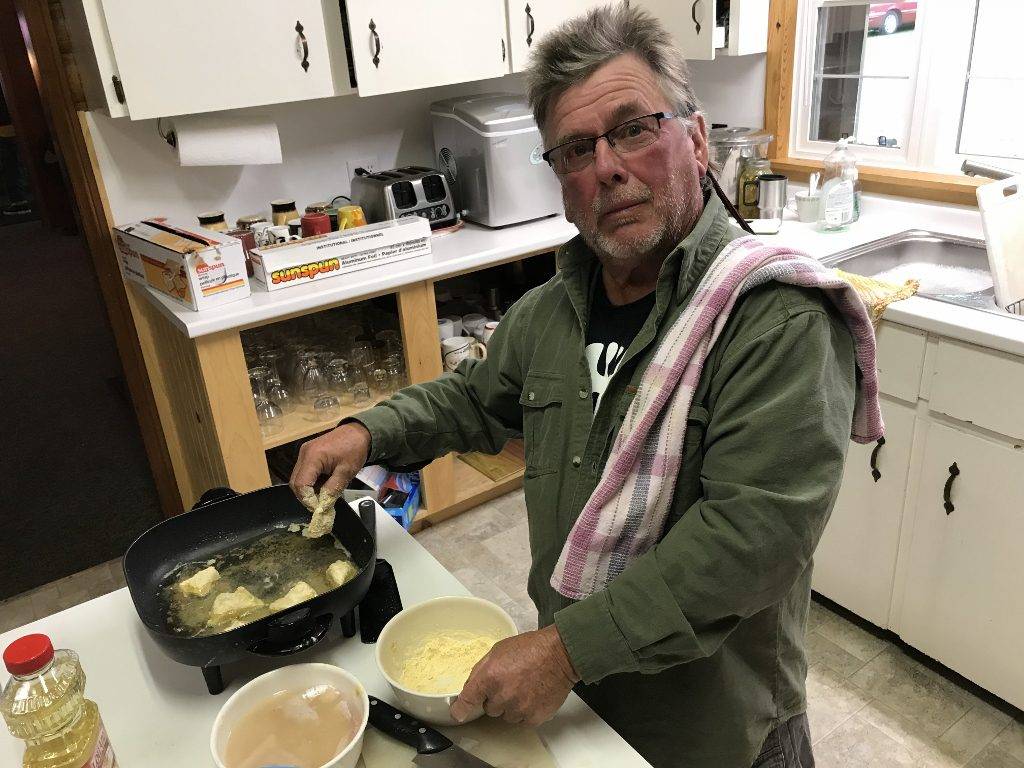 Meanwhile, back in the kitchen Ric puts the finishing touches to his special fish dish while contemplating his speech, should he win. 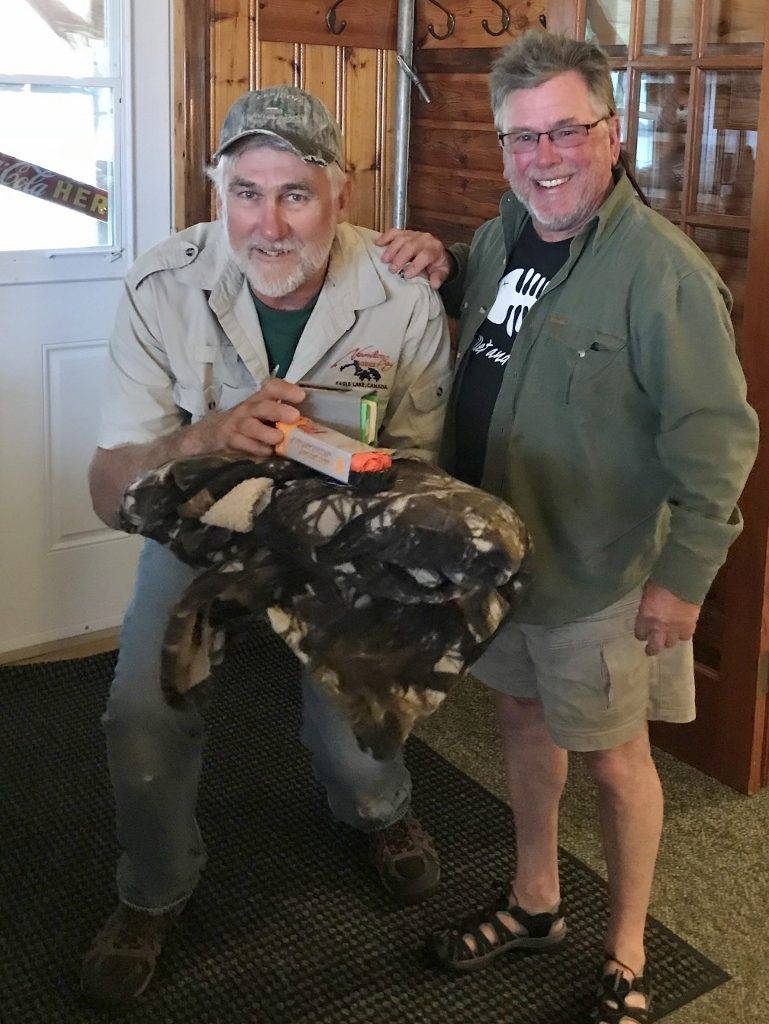 Oh, no, it was not to be.  A good effort and a runner up prize (fabulous VBL bling).  Sadly though, the loss was hard on Ric…seen here somewhat shrunken in his defeat.  While he did take 3rd place it was enhanced by the fact he beat his boat partner Brad Walker. 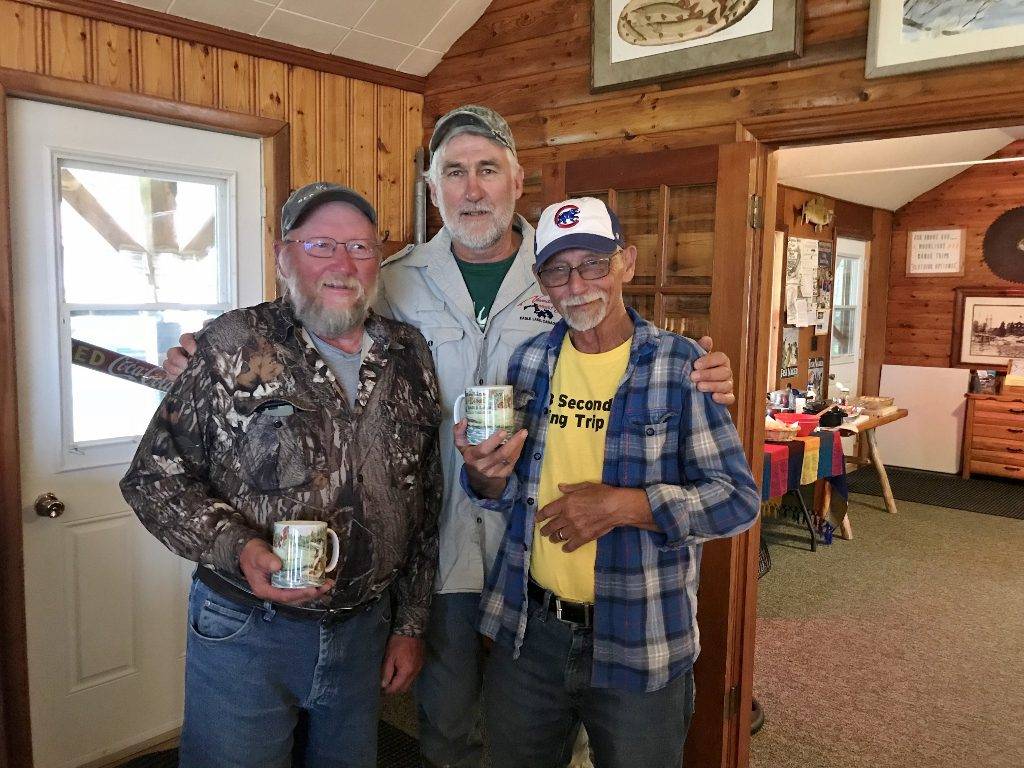 Not sure where these two seasoned veterans placed but obviously they are relieved to have won mugs rather than toilet paper! 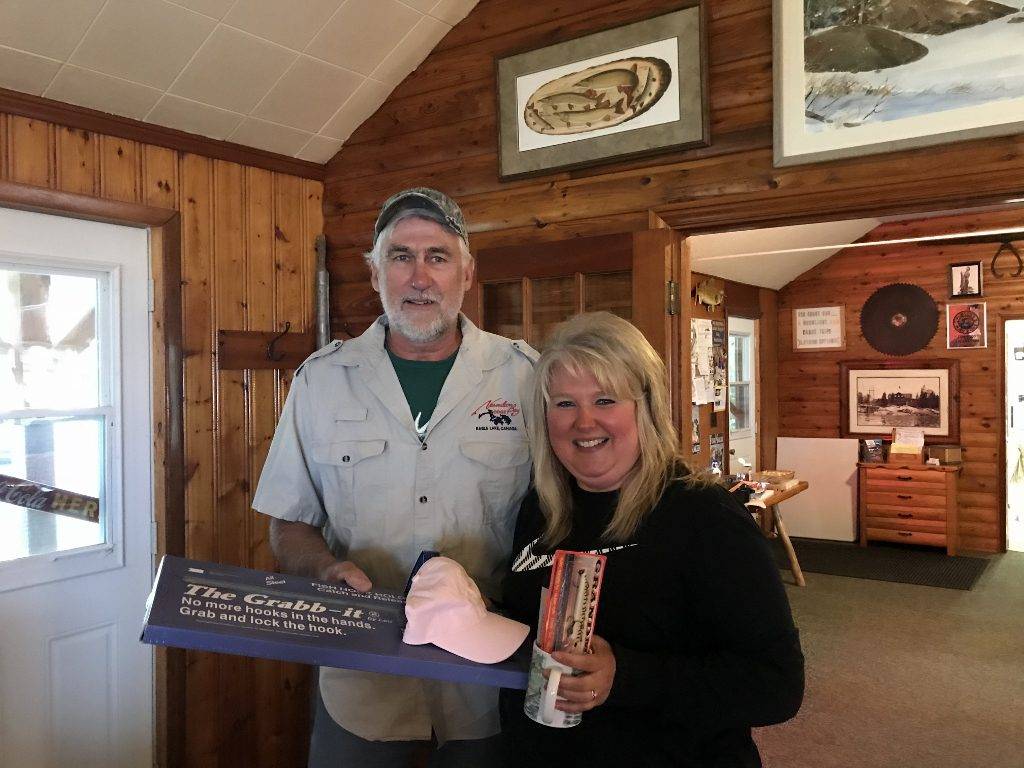 Bringing home the bacon.  Way to go Jen for releasing a 36 inch northern! 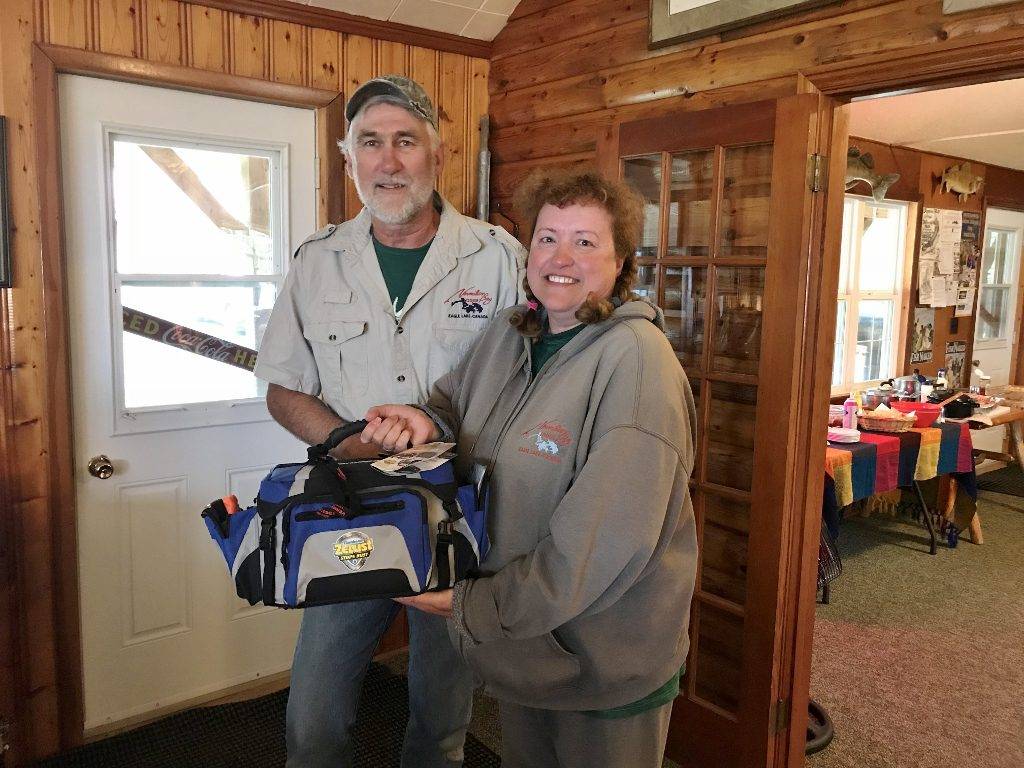 Second place winner Marcie Carey is ecstatic with what she incorrectly thinks is a new purse. 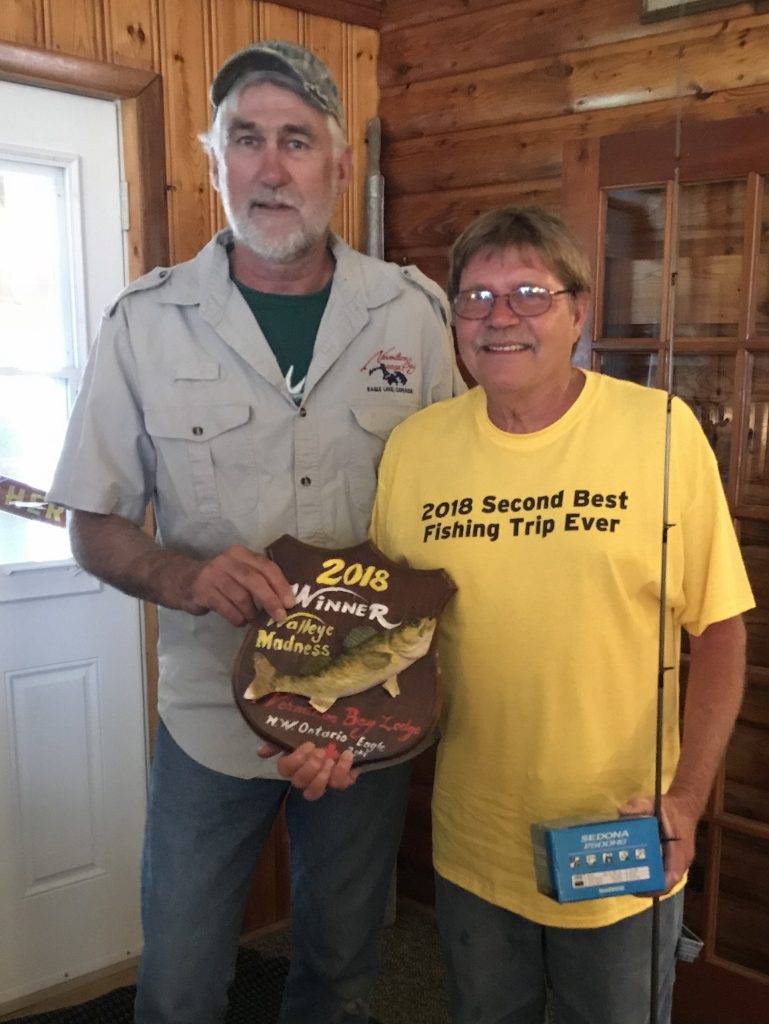 The winner of the 2018 Walleye Madness, Scott “the weasel” Wesling taking home a carved wall plaque and assorted walleye gear.  Congratulations!  Pro tip:  Scott is returning in 2019 to defend his title.  His weakness’s include:  early mornings, patience, Old Milwaukee beer and soft puppies.  Plan your strategy carefully  if you wish to take on “The Weasel” in 2019! 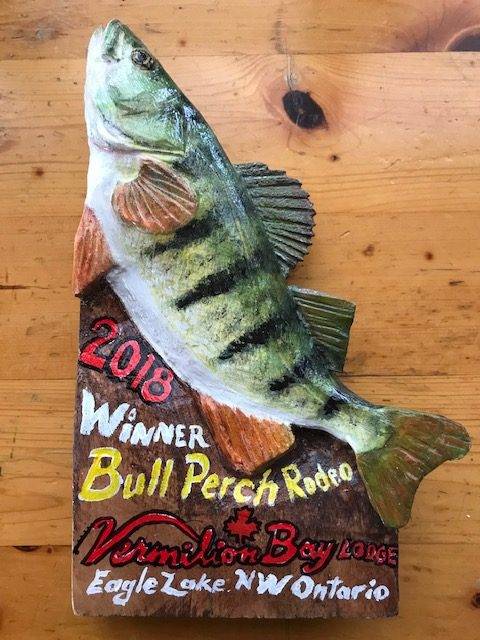 Ah yes, the Bull Perch Rodeo.  Unlike the other competitions this runs all season.  Simply put, the longest perch brought in (and measured by Gord) walks away with this hand carved wall trophy plus bragging rights for an entire season.  Not to mention your name permanently on display in the lodge… 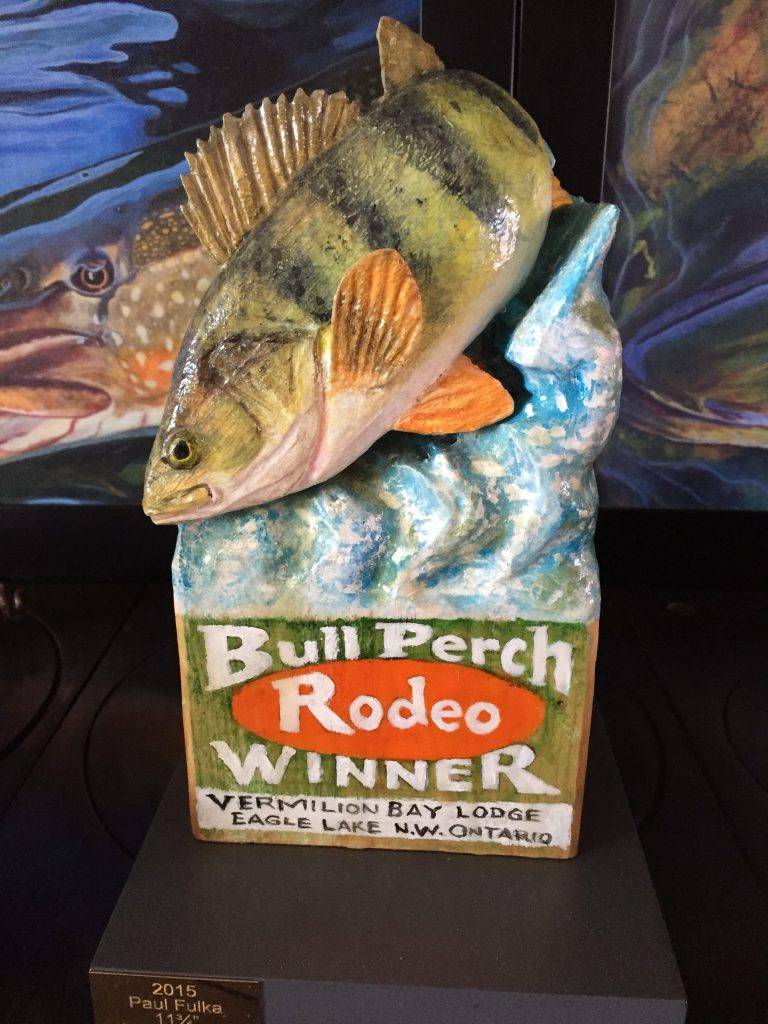 …as a reminder and source of constant aggravation to those who really, really want to win this award.  You know who you are! 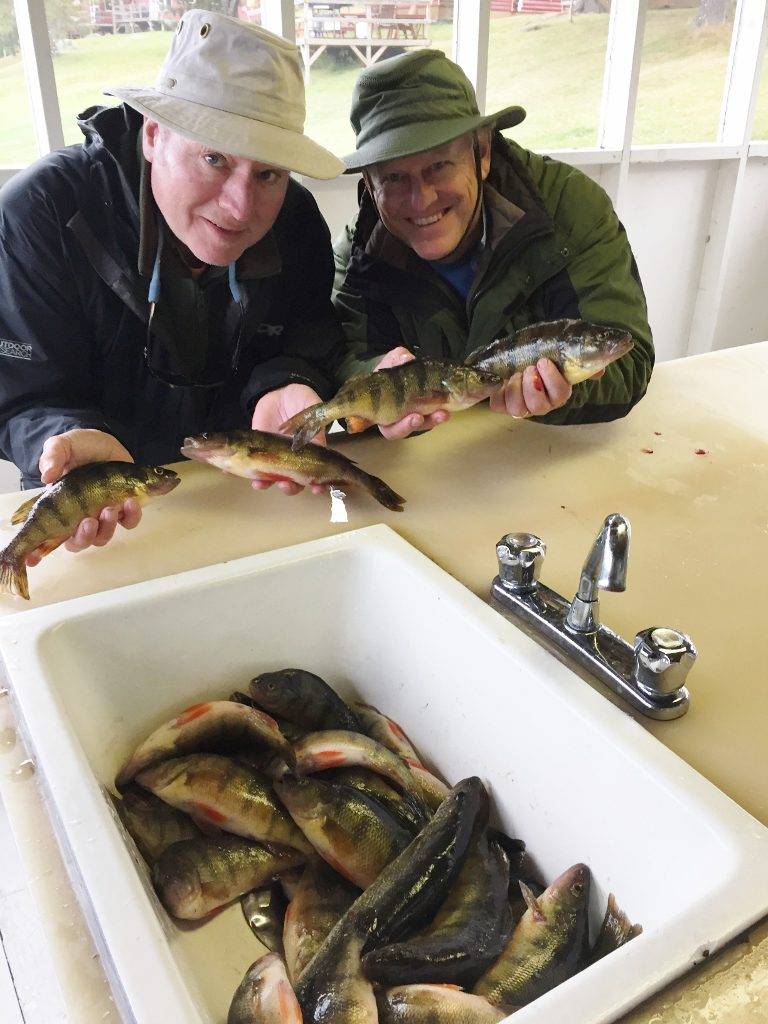 This year we have the unusual conclusion of a father / son duo who tied as winners of the competition.  At 11 1/2 inches we congratulate Truman Wilson and son Zachary for taking the title.  The plaque has been sent for their mutual enjoyment.  As I write this I can feel the tension building for next year.  Andy Lewis?  Paul Fulka?  Kurt Hebecker? Truman Wilson? New guest? 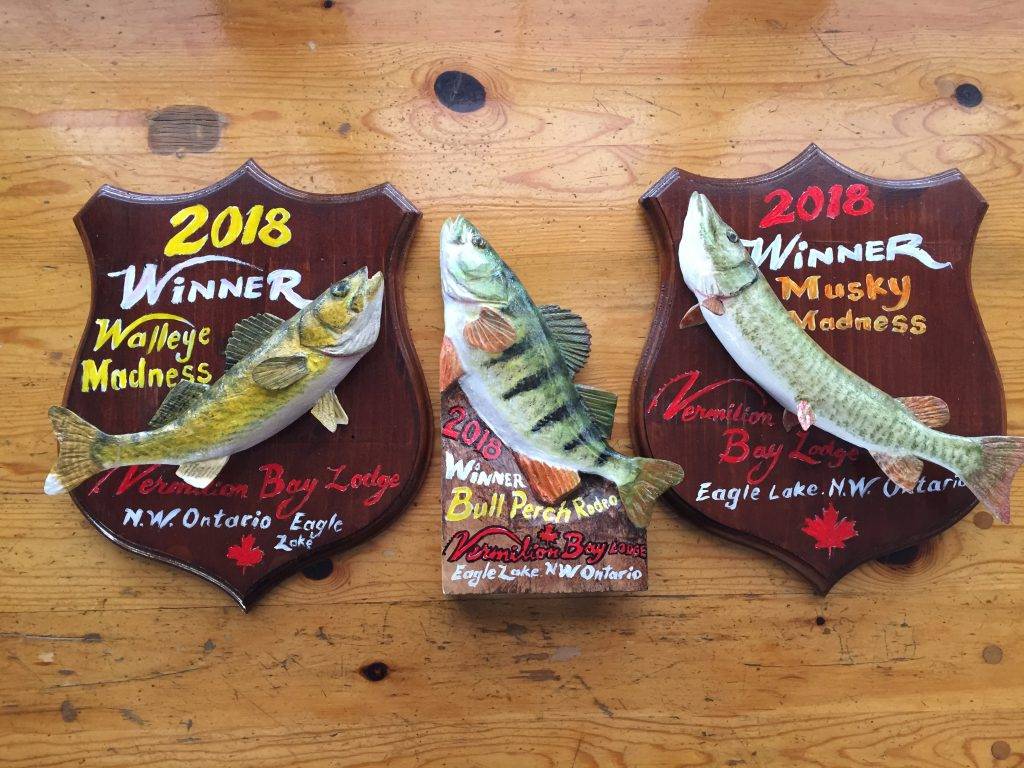 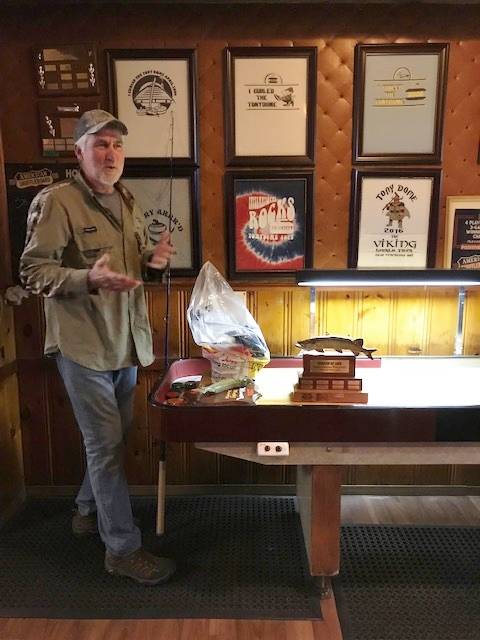 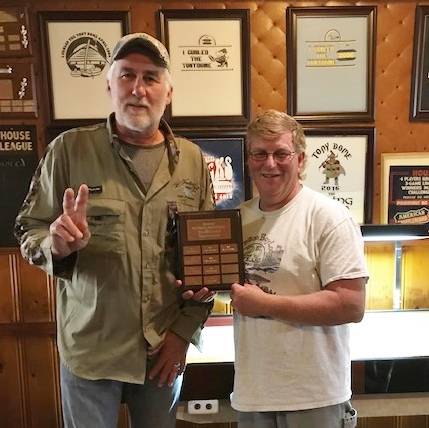 …yes, that’s right.  Another year, another shuffleboard championship for yours truly.  I graciously accept the title from Brent.  Others in the crowd were not so gracious and bordered on being abusive due to their loss.  On the musky I was not so lucky.  Here’s a few of the runner ups… 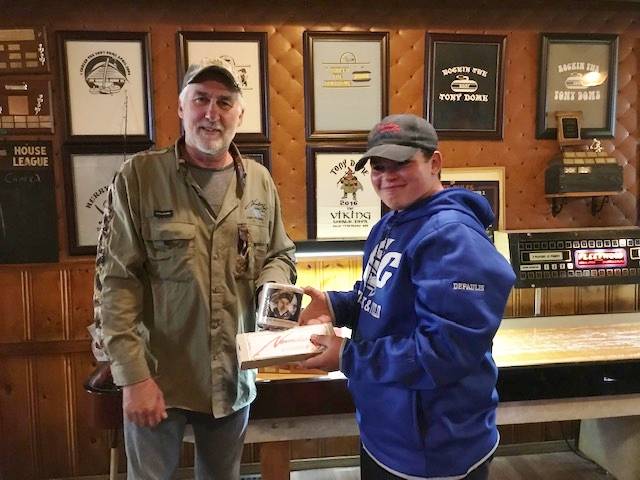 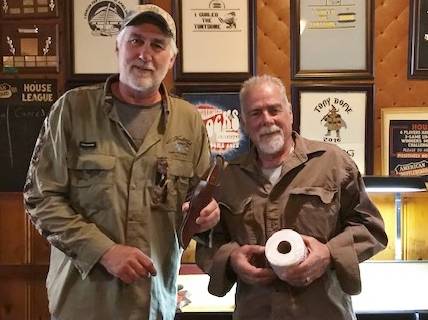 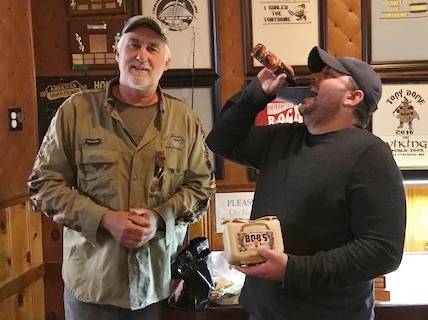 On a side note I have exhausted my supply of limited edition toilet paper.  This will likely be seen as a good thing.  The above photo shows Bob, who placed first and second with his 46″ and 38″ muskies.  Congratulations on a job well done! 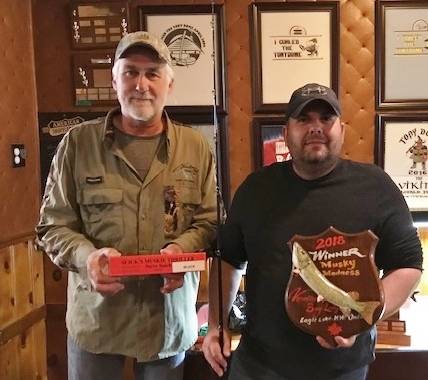 Well, that just about covers that topic.  Now if you haven’t had the chance to participate in any of these “madness” events don’t fret over missing out.  If you think we’re not serious about continuing on with the tradition consider the following.  (Charles Weiss has been busy carving up some dandy trophies for up and coming anglers!) 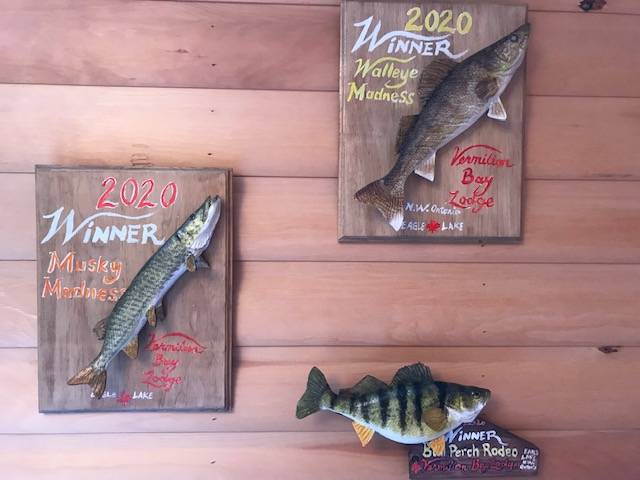 Stay tuned for our next report on some late fall fishing and what’s been happening around camp.  Renovations?  Docks?  Boats? Bob Izumi?